We were back at Kgaswane Nature Reserve, and I am sad to say it was our last weekend for this year at this beautiful Reserve. However as Peter and Maria have told me, you should not look at this as the last time or the ending but rather as the beginning of something new and exciting.

Everyone arrived at Kgaswane around lunch time, and as we were not camping in the same campsite as the previous time we had to wait for an HO to show us where to set up camp. For some of us it proved to be a difficult decision to just where exactly you want to set up your tent (Paul changed his location 3 times). Once everyone was done setting up camp it was time to relax and have some lunch. However Barbara decided to study for the bird test and I decided to join her. It is much more fun to study as a group and before we knew it we were 5 people sitting in a circle asking each other questions. I think it is safe to say that we were not ready for that test as it proved to be quite difficult. After we all had lunch and relaxed for a while it was time to get ready for the slide presentation that was presented by Roger Mayes. In this presentation he convinced us as a non-entomologist to look in more detail at things that we have seen our entire lives. Friday evening was ended with everyone having supper and relaxing around the campfire.

Everyone or rather most of us decided to wake up a bit earlier (5:00) than needed, just to go through our notes for a last time before the test. When the test was done it was time to get ready for the days adventure. We all got together at the assembly point where Roger gave us a run-through of what we can expect for the day. With some assistance from Oliver Oyrer, Roger showed us the different traps that can be used to trap insects and how easy it actually is to make some the equipment and traps.

Once everyone was confident that they knew what to do and how the traps work, we divided into four groups (Wetlands, Grass Plains, Rocky Slopes and Eroded Areas). No insect repellent were allowed. First was setting up the traps for the flying insects with mashed banana as bait, this was done in camp. Second was everyone jumping into a car and driving to the respective areas in order to set up the traps. Once everyone was confident that their traps were in the perfect spot, we headed back to camp to relax and have some lunch. Just before entering the camp we stopped at a large fig tree where Roger asked some of the guys (Brian and Michael) to climb up the tree and get some good specimens (Figs) so that we would be able to study the fig wasps inside of the figs, if we were so lucky to find them in there.

During lunch some took a nice nap and others like me, Rose and Cindy tried to identify a bird that was calling: “I’m so sad” the whole day, we eventually convinced Petra to look it up in her notes and she identified it as the Black Cuckoo.

After lunch we all got together to get ready for our walk in the Reserve. Once everyone was ready (hats, sunscreen and something cold to drink) we split into two groups, one group walking with Roger and the other with Oliver. Our group managed to come across a Solifugae (Sunspider), while it was burrowing, they (excluding me) tried to catch it so that we could study it, however the ugly looking arachnid evaded us all, disappearing into the grass (thank goodness). The walk was very eventful and we caught a large number of insects, with Roger being able to tell us something interesting each time we stopped along the way.

We ended the day with sundowners at mushroom rock.

We all decided to contribute to a feast on Saturday night. The evening started with the most delicious starters made by Petra, followed with Rose making a braai pie/pizza, Cindy doing baked cabbage, Paul making Kalahari pap, Barbara doing a nice pear salad and I brought a sweet watermelon. Then finally we got to the desert, Chris brought his American desserts, Mario brought Ultra Mel and Tiana made the most delicious Malva pudding. We ended the evening sitting around the fire, each with a cup of Irish coffee before going to bed.

The morning started early with everyone getting up and ready for the day. After Roger gave us a short introduction to the day as well as handing out the equipment we all climbed into our cars and drove to a nearby river. This is where our insect hunt started. Upon arrival we were divided into two groups again, the one group going a bit downstream and the other going upstream. The main focus of the day was to catch dragonflies as well as damselflies and trying to identify them. I was amazed as to how beautiful they were, however the same cannot be said about their larvae. The second stop we made was at the so-called “Kruger House” that was built by a soldier, a volunteer, who served in the Corps known as Lumsden’s Horse. It is here where Oliver gave us a short tour of the house as well as some historical background on the place. Our last stop was at a dam, where we saw a fair amount of butterflies, especially LBJ’s (Little Blue Jobs) but was not able to catch them all. We ended the day just before midday by going back to our different locations to collect our traps and see whether or not we were able to trap anything. Some were lucky enough to have trapped a ground beetle or even three dung beetles in one trap, others were not so lucky.

When we got back to camp we checked our air traps, we caught a large amount of flies as well as moths. Roger did a quick rap up of the weekend and because our group is so well trained in packing up camp by now, it was done in a flash and we were all on our way home.

I want to thank Roger Mayes, Oliver Oyrer, Peter Gordon-Cumming and Maria Cazzavillan for teaching us how to look at the world with different eyes.

Some interesting photos from the weekend 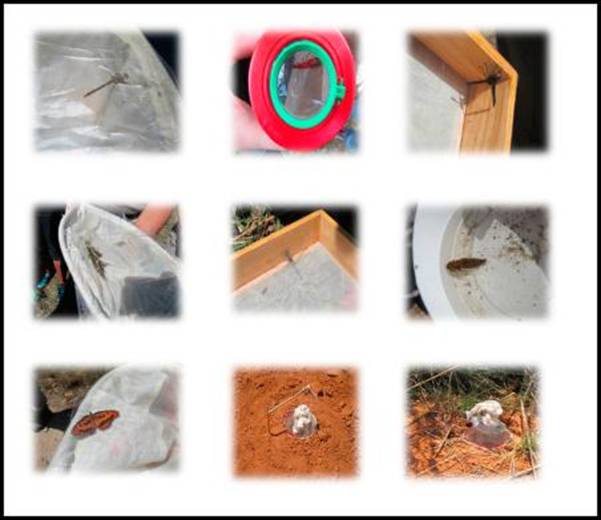 Ed’s Note: A special thanks to student Nadia De Villiers for providing us with this comprehensive and entertaining report. It makes for great reading of a weekend enjoyed by all.