Excited to be back in nature, away from our fast-paced lives, and with a group of like-minded people, we tackled the weekend with anticipation and bright eyes! It seemed that the group already started to form a bond that will only get stronger as we move through the year.

We were all nervous about our first test for the course. Arriving at camp did not ease our nerves. Everybody gathered in study groups to go through the material before the test – and some of the terminology that they used was ‘Latin’ both literally and figuratively.

At 18:30-ish we drove to the Ed centre, like cows to the slaughterhouse (Ulrich did put a very clear picture in everybody’s heads about slaughterhouses at the previous weekend). Once there, we all greeted each other and made small talk about the test. Anette spotted a bird on a branch in the distance, and we went to investigate. Because it was already dusk, it was difficult to ID the bird, except for Sunet with her lazar eye-sight and knowledge of birds, who immediately pointed out that it was a pearl-spotted owlet. The sceptics that we are, Heinrich, Anette and I investigated a little more, but soon discovered that it was indeed the pearl-spotted owlet.

This took away a lot of the tension, until we had to take our seats. Pilanesberg was the only familiar site on Friday, because when we entered the classroom, our “territory” was disturbed. The tables were re-arranged so that Maria and Peter could properly see our struggles in the exam.

After the exam a sense of relief fell over the group. We discussed our victory and our failures, and laughed sadly at the mistakes we might have made (if only we could remember), except for Simon, who had the time to calculate the amount of marks he was probably going to get!

When everybody was done (and time was up), Maria called us back to explain how Saturday would work – a new dawn will rise!

As usual on the Saturday morning, everybody rushed to the bush-bathroom for a little me-time. Coffee, cooler box, class! Here we started with a little exercise on how the assignments should be done, referenced and put together.

Next up was Prof Lesley Brown, an Environmental Scientist specialising in vegetation from the University of South Africa, and our lecturer for the weekend. He was excellent and very informative (more than our minds could grasp), but he was also humorous, which made it so easy to listen and learn from him!

Anette asked him whether he believed that trees are sentient. He told us a story about a student he once had on an outing much like ours. The student had too much to drink the night, and went to a tree to break water. White as a ghost, he came running to Prof Brown screaming! “What??” was the obvious reaction from Prof Brown “The tree moved Prof! The tree movvvvved!” the student replied. In disbelieve, Prof Brown and a backup group went to see this moving tree, the student leading in terror. When they got to the place where the “tree moved” Prof Brown saw that the tree had indeed moved, except it was not a tree but an elephant! Luckily it was a Dumbo-like elephant and not Amarula, the Pilanesberg bull! That is when a tree is sentient… right?

We started with the structure of a simple leaf and moved to terminology. Prof Brown in his colourful and creative vocabulary even explained that ovate and obovate is like a man on the beach – ovate is when he is alone with his stomach hanging almost to the ground and obovate is when he sees a beautiful woman, pulling in his stomach and pushing out his chest. This creative way of explain the terminology captivated our imagination and helped us to remember.

Next we worked with the key to identify trees. Prof Brown explain very thoroughly while we looked at him like “nagapies” how the key works and how we should go about using it. After about 5 min into the explanation, he realised that we had not receive the keys! We never even realised we needed our own keys (such experienced students!)

After lunch we went to the bush! Prof Brown pointed out trees and their features, the ground structure, grass, water and everything else that falls into the ecosystem. We absorbed his words like water in the desert. We gathered samples on our way back from the mountain to key in the camp. 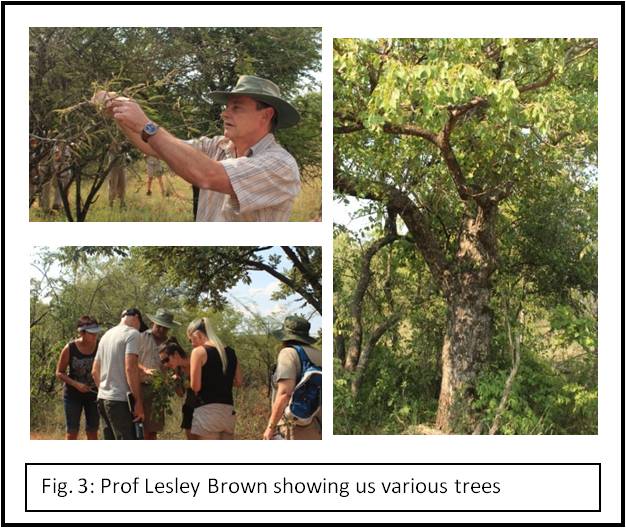 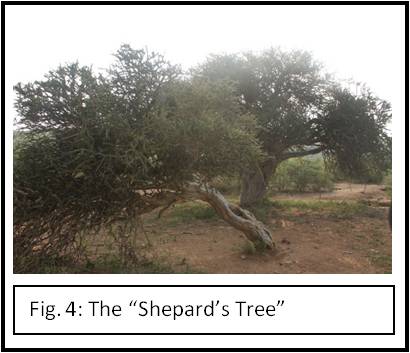 In the evening there was lightning and dark clouds in the sky, but only a light drizzle fell. The heavy weather rising in the distances caused everybody to jump into action to get their meat on the braai, and some even had to braai under umbrellas when it started to rain! On the bright side, we all ate that night and at least it was braaivleis!

Sunday morning we all gathered in the camp for the day’s class. Prof Brown gathered a lot of samples for us to key, and we worked in our groups that we were divided into for the first time. Maria and Peter handed us loupes to look at the finer details of the plant, like whether it is glabrous or glaucous, or to see the types of margins on smaller leaves. It went smoothly, and although we needed some help here and there, all the teams managed to id the samples using the keys.

The weekend was a huge success and everybody enjoyed it very much. We went home with a new perception on trees, but also on how we are growing and learning what nature is really all about!

Now to start preparations on next month’s test… 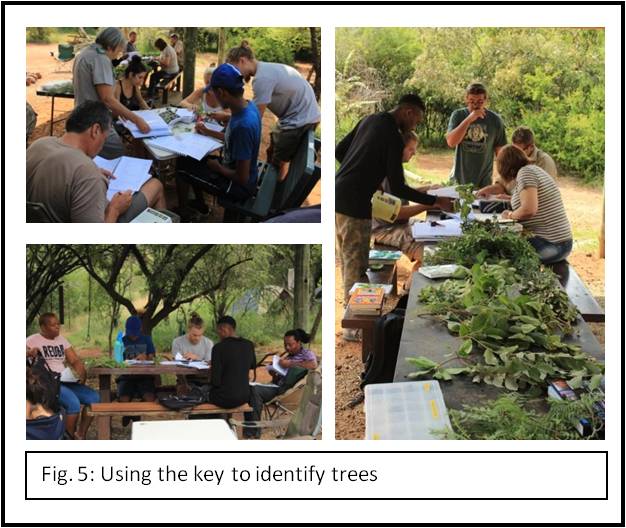 Ed’s Note: Many thanks to student Tanya for this very interesting and entertaining report on the trees weekend. Guess we are all going to be on the lookout for “moving” trees this year.