May always signals early nights and bright stars, meaning winter is around the corner. We arrived at the Ed Centre at Pilanesberg at the usual time, but this weekend we greeted each other in the dark. Unlike the weather around us hinting at cold nights coming, a warm family feeling arose when we “met again” in the parking lot. This overwhelmed the jittery feeling for the grass test that we were facing. We took our places in the classroom and prepared ourselves, but surprisingly the test was not as difficult as anticipated (we thought – only time will tell)

The morning started at around 07:30 and we all gathered for the lecture, back at the Ed Centre. We were happy to see Ulrich as our lecturer. In his first lecture he sure made us think (critically – and one could say forcefully) about subjects that are somewhat taboo, but the fact that we were able to walk out of his previous lecture alive and thinking, made us excited for what was to come.

We started off with a presentation on mammals where we discussed fossils and the origin of mammals. We briefly overviewed the different characteristics of mammals and their classification in the taxonomical system.

Thereafter we headed back to the camp for a short tea break. After tea, three tables were set up with various skulls and parts of animals. We were divided into three groups and given 15 minutes per table to identify the different objects. With this exercise Ulrich tried to demonstrate how difficult it is to identify something if you look at only one part in isolation, without knowing more about the animal. 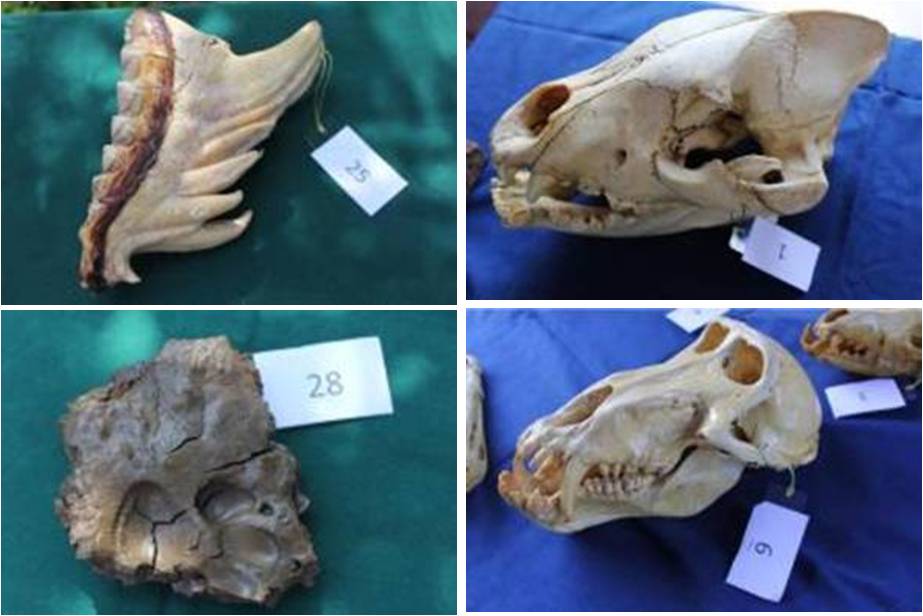 After an exciting morning it was time for lunch. We were all very excited for the game drive that would  follow!

The game drive turned out perfect! Our guides for the evening were Nico and Ulrich. We started off at the campsite at around 15:30 and returned at 20:00. On the drive we saw a variety of mammals, including White Rhino, Zebra, Elephant, Blue Wildebeest, Klipspringer, Steenbok, Kudu, Impala, Lion, Leopard, Giraffe, Warthog and Black Backed Jackal.

Fig. 2: Some mammals in Pilanesberg that was seen on the game drive

This game drive was different because of the way Ulrich had us thinking about the behaviour of the animals and the adaptations that are created in different environments.

Sundays are made for long walks in the bush and tracking animal spoors. Sunday morning started at 07:30 at the Ed Centre. “We will walk for about 4 hours” they told us, so we were prepared for hard exercise. But it turns out that 4 hours fly much faster when you are in the bush, than when you are in the office, and tracking spoor for 4 hours does not mean that you will walk  5+ km.

We were divided into two groups – one group went with Ulrich and the other group with Bennet De Klerk, an Honorary Officer  and owner of Motsumi Bush Courses in Rustenburg.

While looking at spoor we were taught to not look just at what something is, but at evidence – at what is in front of you. “What do you see?” was the main question that was imprinted on us throughout the morning. How often do we look at what is really there instead of what we think we know is there? Not just with spoor tracking, but in our everyday lives. This was definitely one of the (life) lessons that Ulrich and the Bushveld Mosaic team sent us home with. We saw Banded Mongoose, Impala, Kudu, Giraffe, Warthog and a few bird spoors.

Spoor does not just mean prints in the sand. We also looked at different droppings and middens in the veld, we broke open some of the droppings of the herbivores to see the extent to which the leaves or grass were digested, and by looking at that, we were able to determine which animal the droppings belonged to. We looked at how environment plays a huge role when identifying tracks (because some species do not live in certain habitats) and that it is often necessary to look up from the tracks to see the bigger picture.

After an eventful morning we went back to camp for a little admin and to clean up. Another great weekend spent in the wild, learning about the wonder of the world.

The weekend in Pilanesberg was followed by an outing to the National Zoological Gardens of South Africa in Pretoria. We had a lecture in the zoo’s education centre where Ulrich took us through the mammals sections that we didn’t discuss previously, such as the African Antelope and Animal Behaviour, with a beautiful presentation.

After the lecture, everybody was free to take a look around the zoo. It rounded off the mammal’s module perfectly and brought the practical and theoretical together.

ED’s Note: Many thanks to Tanya for this enlightening article on the mammals’ module.