We were off to Borakalalo once again for the next module in the Bushveld Mosaic course. It was all about geology, which I of course thought was rocks. How complicated can it get? 😊 We were privileged to have Professors Paul Nex and Judith Kinnaird as our lecturers for the weekend. Like with all the other modules thus far, two very knowledgeable and passionate lecturers.

Friday evening started off with some relaxed chats around the campfire as we had no test to write. The cold crept in not long after 20:00 and many of us were off to bed quite early. It was a cold night but apparently not as cold as previous years. Everything outside our tents were pretty much frozen though. We headed out to the lecture hall to start at 7:45.

We started off with the definitions of rocks and minerals. We then started exploring the many different features of minerals e.g. lustre, cleavage (not the one known to you), tenacity, specific gravity, etc. We also did some experiments to figure out some other features like magnetism and the effect acid has on some of the minerals. Some of the students quite enjoyed tasting the minerals as well! 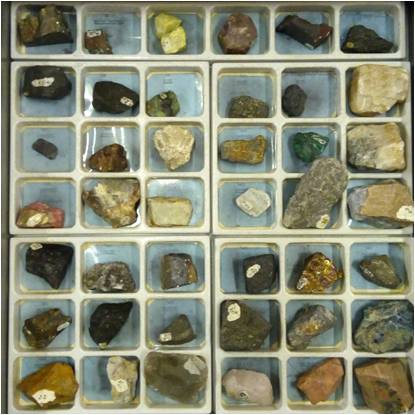 Fig. 1 One of the many mineral trays

After we had a better idea of how minerals and rocks are actually connected to each other we started learning about the different ways’ rocks are formed. At one stage it felt like my brain was going to explode. We learned that rocks are formed in three ways i.e. from igneous origin, sedimentary origin or metamorphic origin.

Igneous rocks are formed by the solidification of liquid material either in or on the earth’s surface. We learned that this rock forming material is also referred to as magma before it erupts on to the earth’s surface and is thought to originate from the mantle. We went on to learn about the common intrusive igneous rock bodies like dykes, sills and batholiths. Granite is probably the most well-known igneous rock. We then went on to inspect and explore some more trays with igneous rock samples.

After a full day of lectures, we were taken to a site to try and identify the type of rock. It’s not nearly as easy as you might think, and I reckon it takes a lot of practice to be able to identify and distinguish between the different rocks. Prof Nex  explained ‘horizontal bedding’ to us as it was clearly visible on the rock face. As the sun started setting some of the students went up to the top of Pitjane Hill to appreciate the view over the Klipvoor dam and Borakalalo. It must be one of the most diverse parks in the country.

Fig. 2 Trying to identify the type of rock on this site 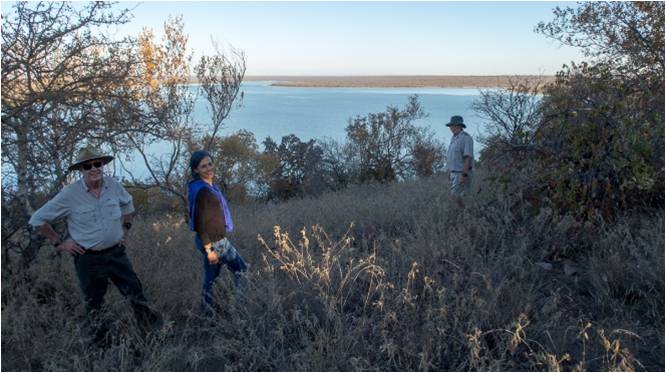 Fig. 3 View from the top of the hill (Picture courtesy of André Harmse)

Everyone again had a nice quiet evening around the campfire and reminisced about the day’s lectures and practical experience we gained. We had one more lecture scheduled for the Sunday morning and as everyone was tired after a long day, it didn’t take long for everyone to head off to bed. You need enough sleep to be able to take in all the information.

Bright and early on Sunday morning lectures started on metamorphic rocks. This is a term used to describe existing rocks that have been altered, in the solid state, by high temperature and/or pressure. This type of pressure or high temperature again forms different rock types like quartzite, schist, gneiss and slate. After some more trays we headed off to two different sites to identify rocks. The first one was ‘ouklip’ or ferricrete (a sedimentary rock) and we were told that it is actually ‘new klip’ because if you compare ouklip, which is only about 10 000 years old or younger, to the other types of rocks which are up to 3 billion years old, the name doesn’t make much sense. Our last stop was at a site closer to our campsite.

Here we were amazed by what we were told as there could have been a beach and river delta at the same location about 2.5 billion years ago. One rock clearly stood out to all of us. It had, what looked like ripples, on it. One of the students went to investigate and concluded that it was indeed water that caused this kind of pattern.

Fig. 4 Evidence of water flowing over rocks at this side billions of years ago  (Pictures courtesy of André Harmse)

And so, another weekend came to an end. We were relieved that the weather played its part and besides a few dish cloths frozen in the morning and gas stoves struggling to work, temperatures only dropped to about -2°C. Temperatures inside the lecture hall on the other hand were quite hot as many of our brains worked over time to take in all the information shared with us. Who would have thought that on this Earth there are so many kinds of rocks? So many times, we just walk past rocks and mainly use them for throwing at things. After this weekend I now have a new appreciation for the smaller and many times unnoticed things. Thank you, Paul and Judith, for another insightful weekend.

ED’s Note: Many thanks to student Tanya for this very precise and full write-up of the weekend.